Monte Carlo 6 proves a worthy addition to the Beneteau Monte Carlo family, offering an interesting and stylish alternative to the usual sixty footers without sacrificing practicality or usability

This year the Beneteau Monte Carlo range has expanded upwards with the introduction of the Monte Carlo 6. As you’d expect, the appearance is pure MC.

All the styling cues from that upright stem proudly bearing the ‘MC’ designer label to the circular hull windows and distinctive colour scheme are present and correct. In fact from a distance it is as hard to tell apart as the MC4 is from the 5. It’s only when you get up close that the sheer size of this voluminous sixty footer becomes apparent.

On board it’s business as usual, which equates to elegant, contemporary almost minimalist styling inside and out. Side decks from the large aft cockpit are wide, safe and easily accessed and lead to a flat teak laid foredeck with a couple of unusual surprises. The black panel just ahead of the windscreen lifts to reveal two small panels. These operate what look like large square foredeck hatches but are in fact multi-adjustable loungers.

Interior of the Beneteau yacht

There’s even a remote control so that you can make adjustments as you lie on them. It transforms this often wasted space into a superb spot to while away the day. The flybridge is just vast. Choose from the huge sunpad aft or relax at the dinette, ably provided for from the bar opposite. Or take the carbon fibre framed helm seat with space for a couple of crew members to join you on the bench alongside. Our test boat has the optional flybridge bimini in black.

Inside the Monte Carlo 6 the minimalist theme continues. Beneteau have put the galley aft, great for catering for the saloon or cockpit and ideal for those parties that inevitably end up in the kitchen. Ahead of this is a conventional saloon and at the front is a helm position that wouldn’t look out of place on the Starship Enterprise.

The captain enjoys a massive armchair with a joystick on one arm that controls the Cummins-Zeus pod drive engines and a built in tracker ball on the other that interfaces with the 24 inch Simrad navigation screen.

Your adoring fans can congregate on the adjacent bench seat as you drive the boat with your fingertips. The only oddity here is the single windscreen wiper and the slightly scratchy plastic finish around the helm console – both out of keeping with a boat of this class, and made even odder by the fact that the smaller cheaper MC5 has a pair of proper pantograph wipers and a nicer console finish.

Down below the layout follows the classic VIP double forward, twin bedded guest cabin to starboard and full beam master cabin aft. All cabins are en suite and provide plenty of storage and ample floor space.

The master cabin splits the heads and shower into two separate units in each corner of the starboard side.

A great idea in theory, but since the Beneteau have kept these cubicles as small as possible to maximize cabin floor space and as a result the wash basin is in the cabin between them. So you have to leave the toilet before you can wash your hands and you have to step out of the shower before you can dry yourself. It’s a small point but I’d sooner trade floor space for privacy and convenience.

Beneteau are offering just the one engine option for the Monte Carlo 6, a pair of Cummins QSC 8.3 Zeus at 600hp apiece.

All the usual pod drive advantages are present and correct, vibration free running, joystick manoeuvrability and immediate response to the helm. And it is very quiet, even at wide open throttle the sound meter didn’t pass 75dB(a) at the lower helm.

One rather strange anomaly is the single turn of lock available from amidships to starboard, but two turns to port with a correspondingly sharper direction change.

Given the lack of physical link ’twixt helm and pods (it’s entirely ‘fly-by-wire’) and the amount of programmable parameters available I’m inclined to think that it’s a software glitch. Five minutes with a laptop would probably sort it.

Briefly, for Beneteau this Monte Carlo yacht adds another layer, allowing the brand faithful to stay within its burgeoning family.

With their new model First Yacht 53, Beneteau have opened a new chapter in performance cruisers, a segment they have ruled for decades. As you … 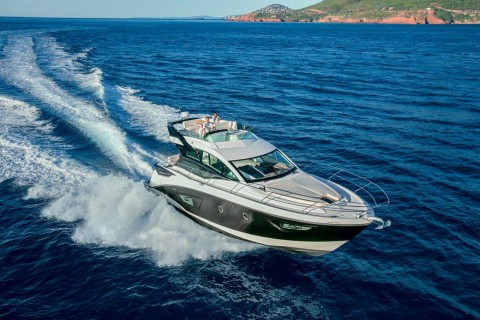 Beneteau – 130 Years of Passion for the Sea From the first sardine boat to the latest Monte Carlo, the shipbuilding tradition has considerably advanced …