As one the leading shipyards in the world for the production of yachts and superyachts, Sanlorenzo has managed to climb the international rankings over the years thanks to the ability to expand its imagination, breaking through entrenched customs and traveling along new and unexpected paths. Indeed, Sanlorenzo was the first company in the world in its segment to be open to different worlds that speak similar languages, like art and design, involving respected names from the world of design and architecture in its yacht’s interior design, such as: Dordoni Architetti, Antonio Citterio Patricia Viel and Piero Lissoni. Through these collaborations, the company has thus introduced innovations and styles that have allowed for reinterpreting the concept of space on board, one of Sanlorenzo’s distinctive assets.

A choice further validated during Sanlorenzo’s 60 years by the start of its collaboration with Piero Lissoni as Art Director of the company. The great style and design affinity, which emerged immediately between the designer and the Italian shipyard, thus giving life last year to the interior design project for the new SX88 motoryacht, has now culminated with the decision to jointly undertake a new path that, using the company’s know-how as its foundation, aims to create new potential nautical design scenarios. A fundamental step for Sanlorenzo which once again confirms its choice of a very precise route that brings it ever closer to the world of design, also thanks to a natural propensity to bespoke and its deep manufacturing tradition.

Specializing in the production of planing GRP motoryachts from 78ft to 118ft (SL line), semi-displacement motoryachts from 92ft to 126ft (SD line), and crossover yachts (the new fast displacement SX line), Sanlorenzo expresses its experience, craftsmanship and innovation, also in the design of superyachts in metal from 40 to 80 meters, a type of craft that rewards the shipowner with the most authentic sense of adventure at open sea, and to which a special division of the company has been dedicated that has reported healthy growth, during the last few years, with particularly significant production volumes: in fact 21 superyachts have been built to date, 15 of which are currently under construction. A significant result that reaffirms Sanlorenzo’s positioning among global leaders and that has made it necessary to recently acquire an impressive production site of over 50,000 square meters, based in La Spezia, entirely dedicated to the design and construction of superyachts.

Elegant and timeless style, as an expression of refined, understated luxury, the fruit of a merging of craftsmanship and advanced technology

At Sanlorenzo, attention to design is also combined with continuous research aimed at innovation: based on its echo-friendly approach, in recent years the company has given great care to the development of technologies for the realization of hybrid and diesel/electric systems and has applied them to a whole range of new models called E Motion. The propulsion systems of these models are able to ensure greater efficiency, exceptional comfort and safety, flexibility and a significant reduction of emissions. As evidence to the company’s sensibility towards environmental issues, the main site of the shipyard, located in Ameglia (La Spezia), inside the natural park of Montemarcello-Magra, on the banks of the river Magra meets the criteria established by the certification Uni En Iso 14001, which certifies having achieved the best environmental impact control related to the company’s activities, products and services. Sanlorenzo, founded in 1958, owes its foundation to Gianfranco Cecchi and Giuliano Pecchia who opened the first shipyard near Florence. 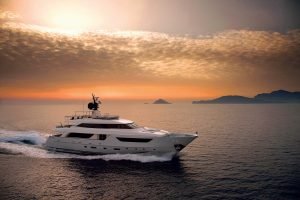 A nautical atelier since 1958 has great sensibility towards environmental issues

Taken over in 1972 by Giovanni Jannetti, the company then called Sanlorenzo Shipyards launched the first fiberglass hull boat in 1985, experiencing extraordinary growth in the 80s and 90s, which led it to move its headquarters to Ameglia (SP) in 1999, where the company’s headquarters areas still currently located. In 2005, Massimo Perotti, already CEO of Azimut, where he had a twenty-three year long brilliant career, took the baton from Giovanni Jannetti, and added a new production site in Viareggio, to the Ameglia site, dedicated to the production of over 100 foot fiberglass yachts. In 2016, the decision was made to acquire the impressive production site of La Spezia, home of the Sanlorenzo Superyacht and the opening of the center dedicated to the study and development of new models, in Massa. In 60 years, Sanlorenzo has in fact built over 750 yachts, each one different from the other because it is adapted to the specific requests of the client. An unmistakable style above fashions, without a strained or an extreme stance, and a refined design, currently place Sanlorenzo yachts at the highest levels of international production, where the Italian shipyard, in its 60 years of history, has become synonymous with absolute excellence in terms of refinement, attention to detail, safety, on-board comfort, performance and continuous innovation in solutions, systems and construction methods.