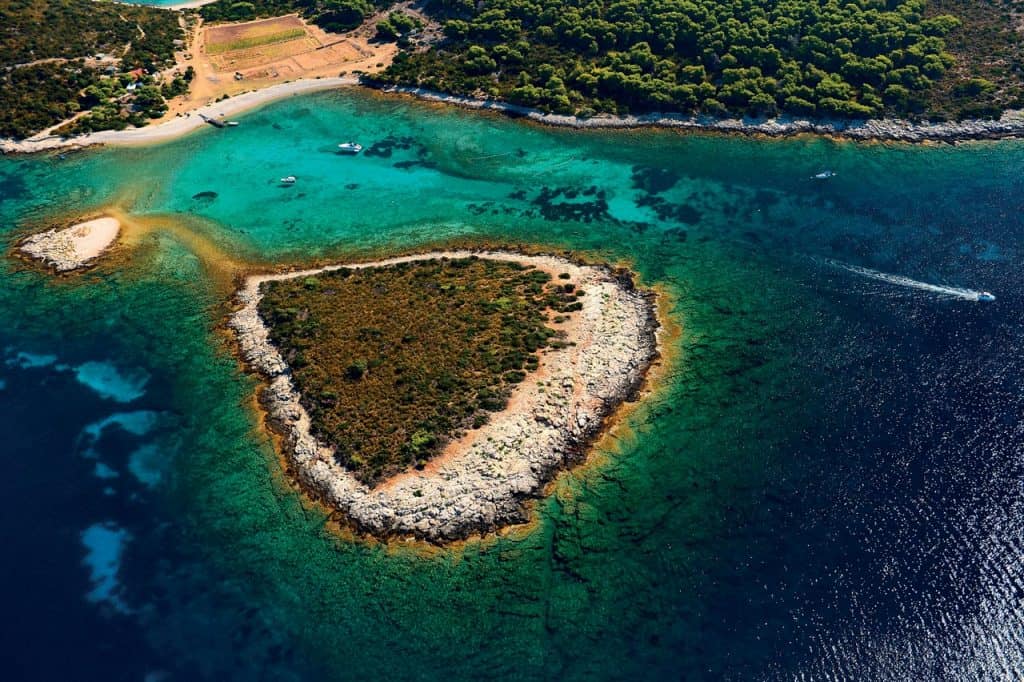 The Beauty That Amazed UNESCO

Parts of the archipelago, especially those around Jabuka and Brusnik islets, as well as the interior of the Island of Vis, were formed by volcanic rocks 220 million years ago, which makes them the oldest in the Adriatic

Croatia just got another geopark. In April, UNESCO named eleven new geoparks, including the Vis Archipelago, to become part of the world’s geopark network. The first and until currently the only geopark in Croatia was Papuk Nature Park, but since the area of the island of Vis and its islets – Biševo, Sveti Andrija, Brusnik, Jabuka and Palagruža – forms a unique geographic area with localities and landscapes of international geological significance, the archipelago was awarded the same status, with the purpose of protecting it, educating and promoting sustainable development. The Vis Archipelago is, geologically speaking, a very attractive area comprising rock formations that have an interesting geological origin. Parts of the archipelago, especially those around Jabuka and Brusnik islets, as well as the interior of the Island of Vis, were formed by volcanic rocks 220 million years ago, which makes them the oldest in the Adriatic, and very different than other Adriatic islands that were formed by sedimentary rocks. The archipelago shoreline is filled with geomorphological phenomena – flooded and semi-flooded sea caves formed by the action of deep water waves on the limestone structure. The longest semi-flooded sea cave on the Adriatic is the Monk Seal Cave on the island of Biševo, and the most visited one is the Blue Cave. Geomorphological monuments of nature of the Vis Archipelago include the volcanic islets of Jabuka and Brusnik, Stiniva Cove and the Green Cave on the islet of Ravnik. Jabuka is located 30 miles off the coast of Komiža and it was formed by igneous rocks. Sailing through this maritime zone can be dangerous because magnetite from the rocks can interfere with the compass, and anchoring is difficult because the island has no bays and the underwater is deep. Still, the endemic black lizards and some endemic plant species have found their homes here. The islet of Brusnik is located a little closer to Komiža, and it was also formed by igneous rocks, but what makes the islet special is its distinctly extra-terrestrial appearance. 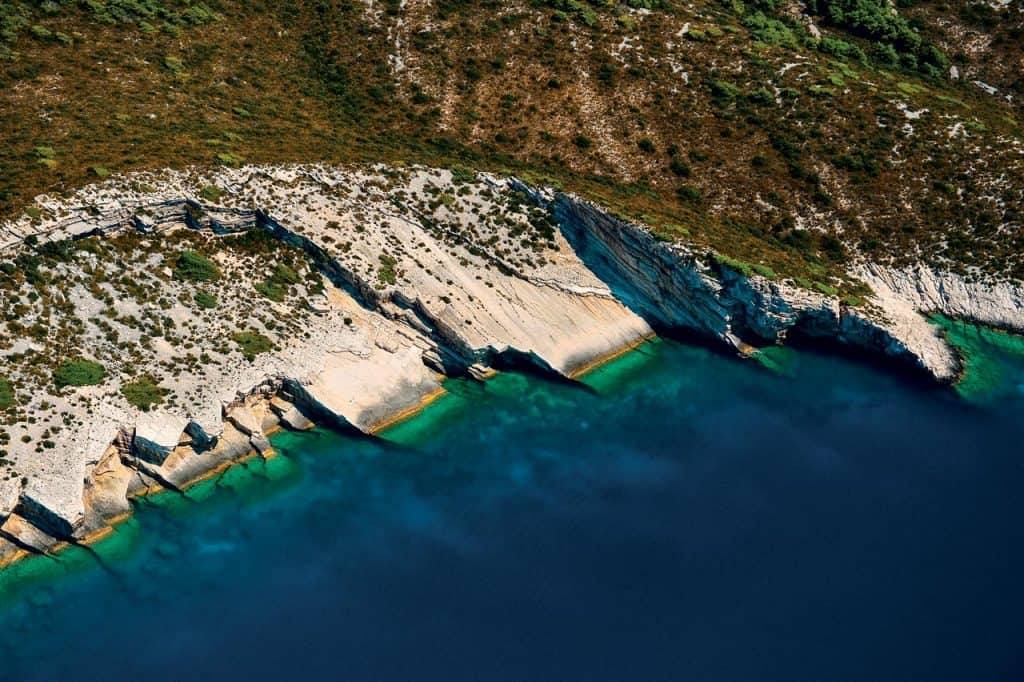 The Brusnik shore is made up of different-sized grey pebbles, and in the middle of the island there is a groove filled with seawater that the Komiža fishermen ‘turned’ into pools in which they keep lobsters that they caught. The islet of Kavalina is hidden in the Brusnik sea bed, while the underwater islands of Gatula, Sika od Trešjovca and Tara can be found off the coast of Biševo. Apart from being considered by many as the most beautiful Croatian beach, Stiniva is a narrow cove on Vis, surrounded by rocky cliffs, which makes it protected significant landscape, as well as the islet of Ravnik, where the beautiful Green Cave can be found. The light penetrates the cave through the central part and reflects, so it seems to be coming from the bottom of the sea. The Komiža Bay is interesting because it was formed as a result of the breakthrough of diapir from the deep sea, and it is still visible on some beaches in the Komiža Bay. Numerous caves and coves in the north-eastern part of Vis are actually large deposits of aeolian sand formed during the Ice Age, when most of the present-day Adriatic was a plain. As the farthest island of the archipelago, Palagruža is particularly interesting because it is a place where a unique mineral – pelagozit – was found and identified for the first time. The Vis Archipelago is one of the last ten paradise oases in the Mediterranean, and together with the islands of Mljet and Lastovo it forms the Adriatic Blue Corridor – the area with the largest level of biodiversity in the Adriatic. It is home to a total of 126 types of birds, some of the most notable ones being open-space species such as Eleonora’s falcon, Scopoli’s shearwater and Yelkouan shearwater, as well as the strictly protected common bottlenose dolphin. In order to preserve the flora and the fauna and terrestrial habitats, the entire land area of the Vis Archipelago, as well as the submarine area around Vis and all its islands, islets and rocks, was made part of the Natura 2000 ecological network. So let’s do our best to protect this pelagian maritime zone so that its beauty can be enjoyed by generations to come! 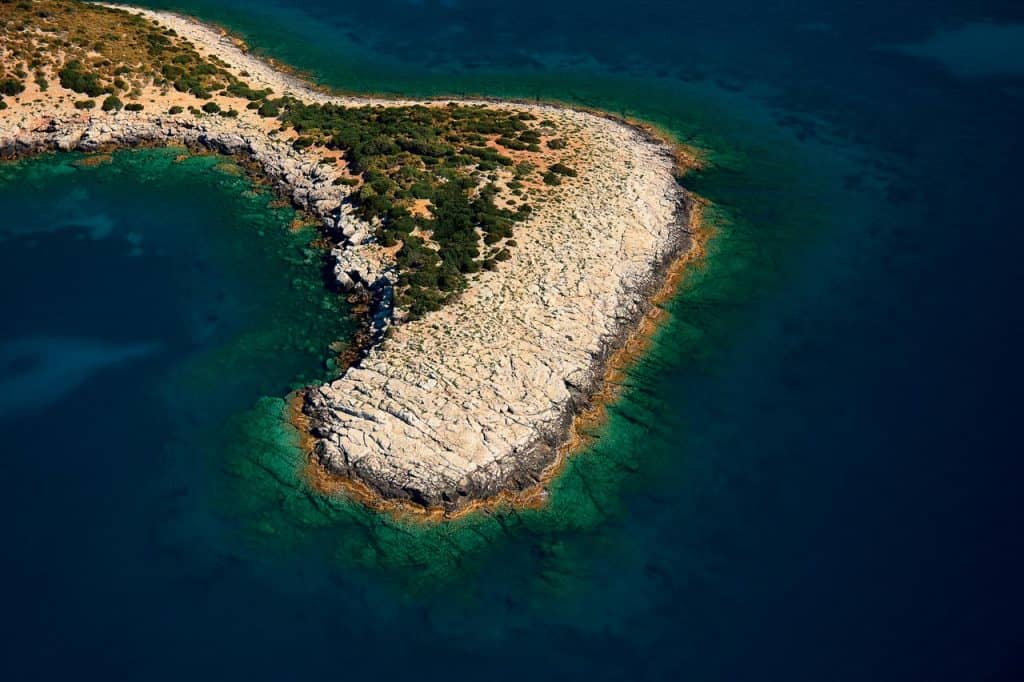 The Vis Archipelago is, geologically speaking, a very attractive area

An ode to hedonism on Brijuni