In its 13th edition, this global yachting event takes participants across four oceans, six continents and twelve cities. With 45 thousand miles in total, it’s the longest regatta in history

The Volvo Ocean Race is often described as the the mother of all challenges and the adventure of a lifetime and when you think about it, this makes sense. Forget the Paris-Dakar rally, the Tour de France or the Giro or the Vuelta. Forget every marathon and every triathlon you’ve ever heard of. They all end in under a month. This year the Volvo Ocean Race starts in October and ends in… late June next year. The race covers 45.000 miles, sails through four oceans and touches twelve cities (Alicante, Lisbon, Cape Town, Melbourne, Hong Kong, Guangzhou, Auckland, Itajaí, Newport, Cardiff, Göteborg and The Hague). The ultimate proof of sailing ability, the hardest test for crew and boat. The race is not as brutal as rugby or as aggressive as martial arts, and yet manages to sit among the most dangerous sporting events in the world. Adventure and danger seem to be what attracts people to it, as the legendary race will once again see participation from some of the most famous names in sailing – like recent winners of the America’s Cup, New Zealanders Peter Burling and Blair Tuke, who beat their American opponent into the ground (or the sea) in Bermuda.

This time the duo will race as opponents; Burling with Team Brunel and Tuke with Mapfre, both looking to become the first competitive sailor in history to win the triple crown – the America’s Cup, the Olympic gold and the Volvo Ocean Race. Unlike the America’s Cup where hydrofoil is king, Volvo Ocean Race is the playground for designers and engineers, not just crews. The Volvo Ocean 65 mono-hull boat used by all crews hasn’t changed since the last race, nobody tried to find a design flaw to use for their advantage, no crew hired an army of laptop-armed experts to calculate the boat half a knot faster. In a slightly communist we-are-all-equal way, all crews come to the arena with identical weapons and it all comes down to the athlete. The winner is the fastest, smartest team. This race is won at sea, not in an office or a studio. The Southern Ocean and the infamous Cape Horn are death traps – so much so that skipper Charlie Enright famously said, ‘To win this race, first you have to finish it’. Without a competent crew, even the fastest boat is useless. The race challenges everybody’s love of sailing, making crew members work to their limit – and work as a team at all times. You really have to be crazy about sailing to spend nine months on a 66-footer with six other men (or ten women), with 25 square meters of living space, with no shower and a potty-sized toilet.

Oh, and one spare suit per leg of race. The suffering doesn’t end there – there’s the infamous 3×4 rotation: you sleep for four hours, spend the next four hours at attention and the following four hours on active duty… and so on. Well, unless sails need to be put up or down, in which case every crew member is on call. On average, crew members lose up to 11 kilos during longer legs of the race – despite the 6.000-calorie regime (for reference, an average person never eats more than 2.000 calories). ‘You can train for all of that,’ says the race veteran Richard Mason. ‘The key to winning is knowing and understanding your crew. At sea, all our best and worst characteristics come to surface. When the race is over, you know your crew mates better than your own family.’ The Volvo Ocean Race is a lesson in teamwork, spirit and sacrifice for a greater cause, and in recent years the organisers have been trying to teach the world – or the fans of the race, at least – a bit about ecology, as well. Most teams have stopped using plastic altogether, as that material is the oceans’ deadliest enemy, and race-sponsored educational seminars on ecology are held in every one of the twelve cities the race sails into.

Great Days for the Enthusiasts

The First Female at the Helm of an America’s Cup Challenger America’s Cup is not the one to boast about gender equality. The oldest sailing …

World’s Leading Sailmaker Recruits Olympian North Sails announced that Šime Fantela will be joining the Grand Prix segment, putting to use his experience across a … 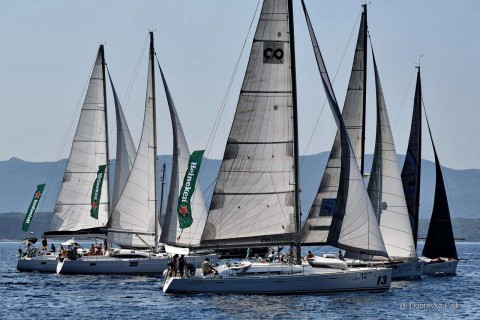 Again, Heineken International Regatta Croatia, powered again by Heineken, will this year take place between July 28 and 30, with participation of more than 30 …

Among the guests coming to TP52 Series race are owner of the NHL San Jose Sharks, executive director of Prada Group and president of Amway …

Evo V8, the fascinating new project by Blu Emme Yachts brand Evo Yachts, is destined to be a talking point with its innovative design and …