Absolute 58 Fly is the only yacht in her class with three cabins and three heads with separate showers. A pure Italian, with large, redesigned side windows and a spectacular bow cabin

Not many powerful builders chooses to debut their new models in the Adriatic, and those who do inevitably attract a lot of attention. Debut of the new Absolute 58 Fly at Internautica in Portorož, was made due to efforts of Adriatic Wave and their persuasive leaders Mario Cankar and Gimmy Valente.

Another best seller for Absolute Yachts

Adriatic Wave has been steadily working toward becoming the most successful Absolute dealer in the region by far, so this opportunity to host the debut of their latest model is an appropriate prize. Smart investments and savvy design moves have made Absolute one of the most popular brands in the Adriatic, and their latest model is set to become another best seller for Adriatic Wave, who have thrown an impressive party to welcome it.
The model was introduced by editor of Slovenian Val Navtika magazine, at the end christening words were said by Mario and Gimmy, and the party started, while we had even better party getting ourselves acquainted with the Absolute 58 Fly.
Absolute 58 Fly replaces the 56 feet model, and brings many new details to the series. The most conspicuous difference between the 56 and older Absolute models with the new one are side windows and the vertical bow of the 58. Half a foot wider than the predecessor, the 58 Fly offers significantly more volume, which strikes you the second you step aboard.

Wide side passages surround the exterior and give impression of ultimate safety (the detail we liked on their Absolute Navettas), and recessed rail is opening view from the salon, which big side windows are allowing natural light to seep in. The interior is spacious, light and offers beautiful views. Right next to the entrance, the L-shaped galley serves both the salon and the cockpit, and can be separated by sliding glass from the rest of the salon.
The concept of galley makes for a wonderful space, very practical and not taking up a lot of space. Across from the galley, the small dining space has a U-shaped sofa and a movable table, and the front starboard part of main deck is reserved for the two-seat command post, that has a lateral door connecting it to the deck. The joystick of the Volvo IPS is placed right next to the skipper’s seat and this door.

Absolute 58 Fly is the only yacht in her class with three cabins and three heads with separate showers, it is an unusually comfortable yacht whose real highlight is enormous bow cabin – with a diagonally placed bed –large and impressive enough to be considered as another master cabin. The actual master cabin is located aft, has a king-size bed and unusually tall windows. The third cabin has twin beds (with possibility of joining into a double bed) and is ideal for kids or guests.

The ideal speed is between 20 and 25 knots

All the spaces in the hull and on the main deck are comfortable and in no way small – even the height of the cabins is impressive. The fly bridge, longer toward the stern and protected by a hard top (bimini sun roof is possible), is almost identical to the fly bridge of the Absolute 60.
The secondary command post is on the front starboard part, as is a seating with a redesigned and multifunctional sofa, hi-fi sound system and a sunbed. All the seating spaces are upholstered in a technical gray fabric, new for Absolute. Down on the lower deck there is a submersible platform, a transom storage – that can host a grill and a sink if you choose this option – and an entrance to the fourth cabin, for the skipper, with a private toilet and access to the engine room.

The engine room is probably the most important part of any Absolute, as the brand owes a lot to their choice of propulsion: the almighty IPS. In this case IPS 800 is coupled with two 600-hp Volvo D8 engines, allowing the 58 to reach 32 knots of top speed. Gimmy Valente, who sailed 58 Fly during the delivery to the port of Portorož at strong winds, says: ‘The yacht was unbelievably smooth, due to the new hull design. We tested it at 20-knot winds and we saw no splash on the windshield. We tested fuel efficiency at 20 knots and 30 knots and got 6.5 and 7 liters per miles respectively. The ideal speed seems to be anywhere between 20 and 25 knots, in my opinion.’

The yacht reached 30 knots in 30 seconds during the test. Final touches that make the new Absolute irresistible and practical are details like the cable storage under the stairs, the new window opening system and LED lights with dimmers. The tested unit was equipped with preparation for stabilizer and watermaker.
After seeing the new Absolute 58 Fly and hearing everything about it we aren’t surprised to hear the production has been sold out year in advance, especially considering this comfortable and well equipped yacht comes at a price just under one million Euros. 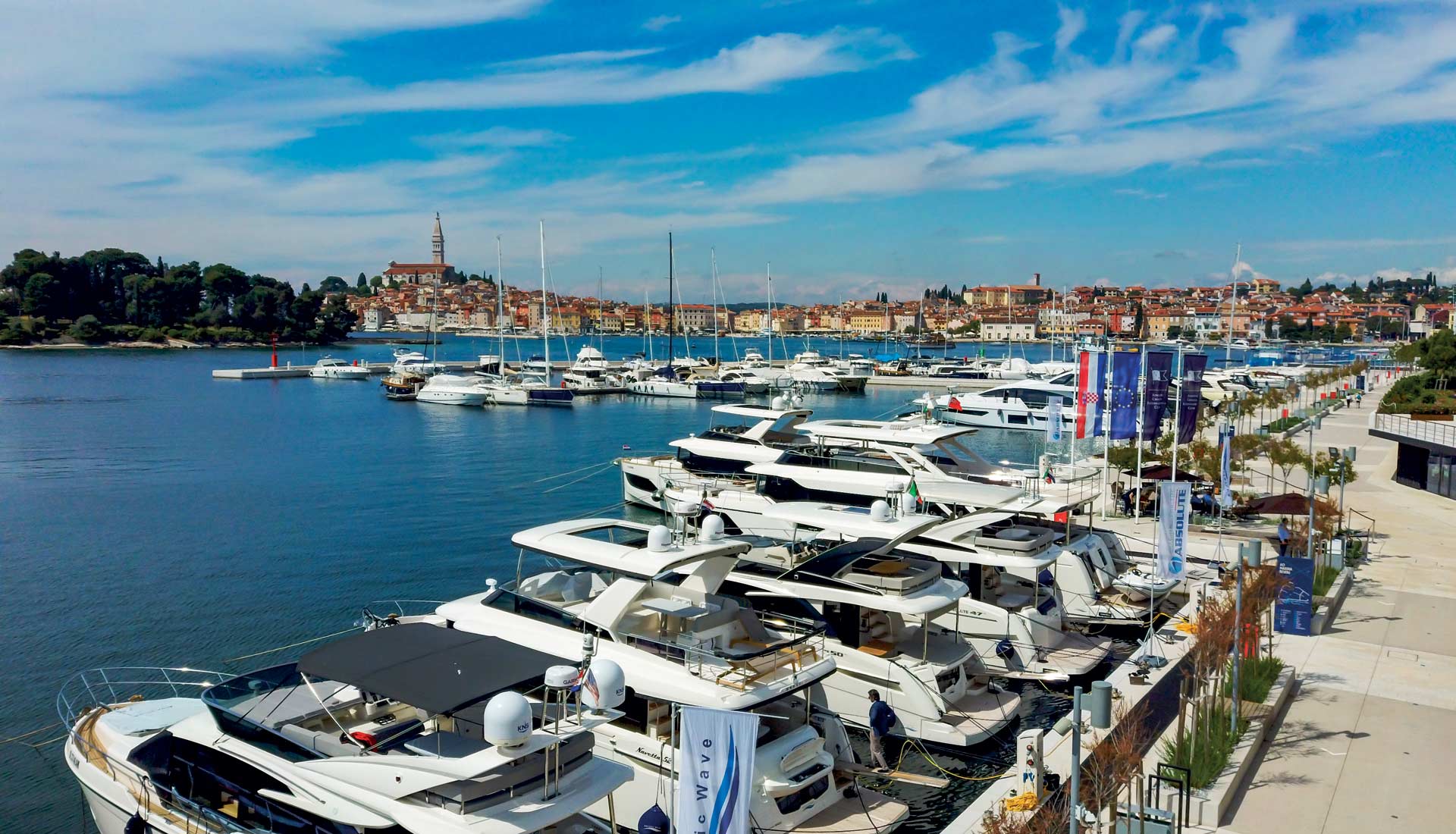 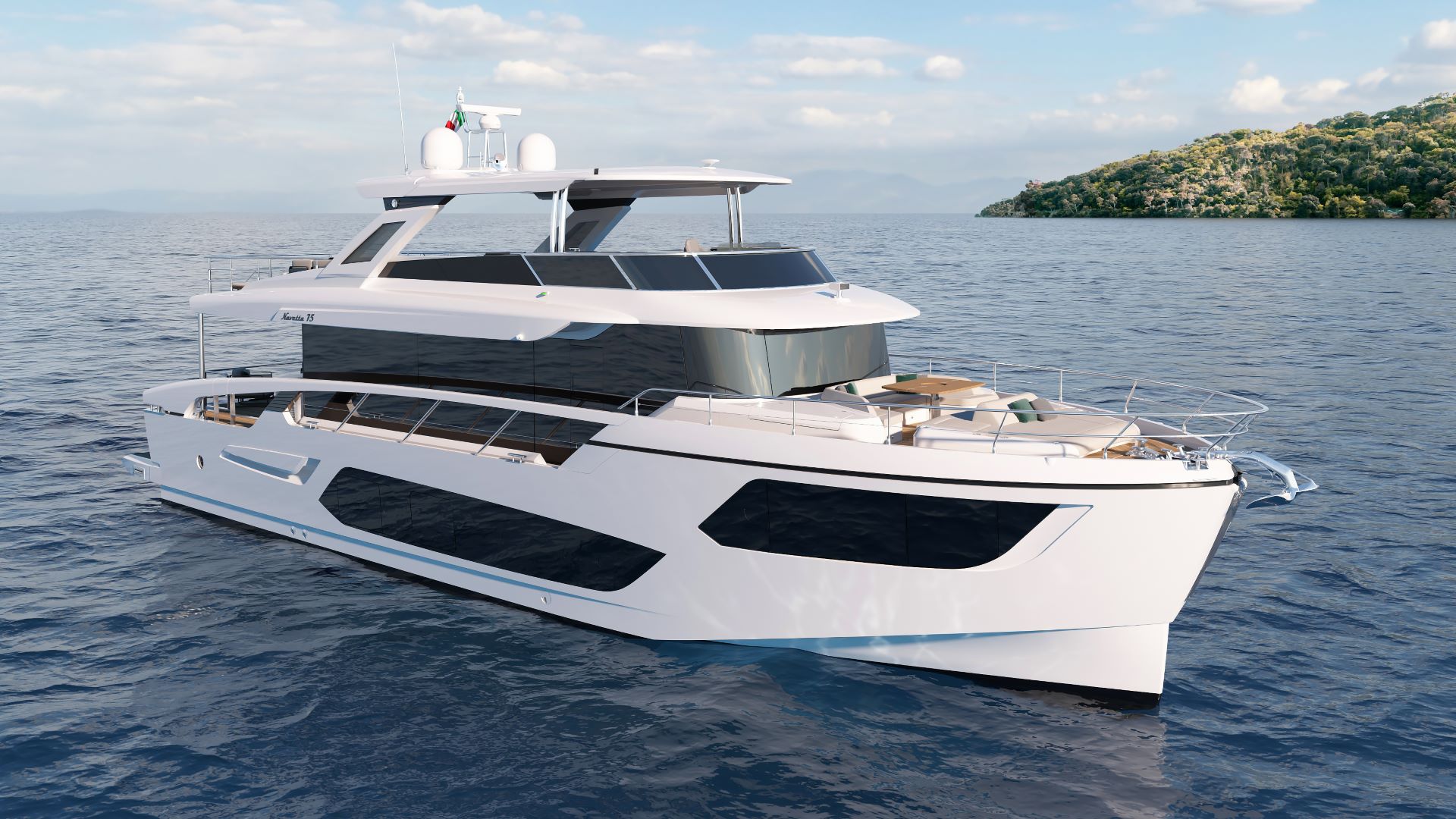 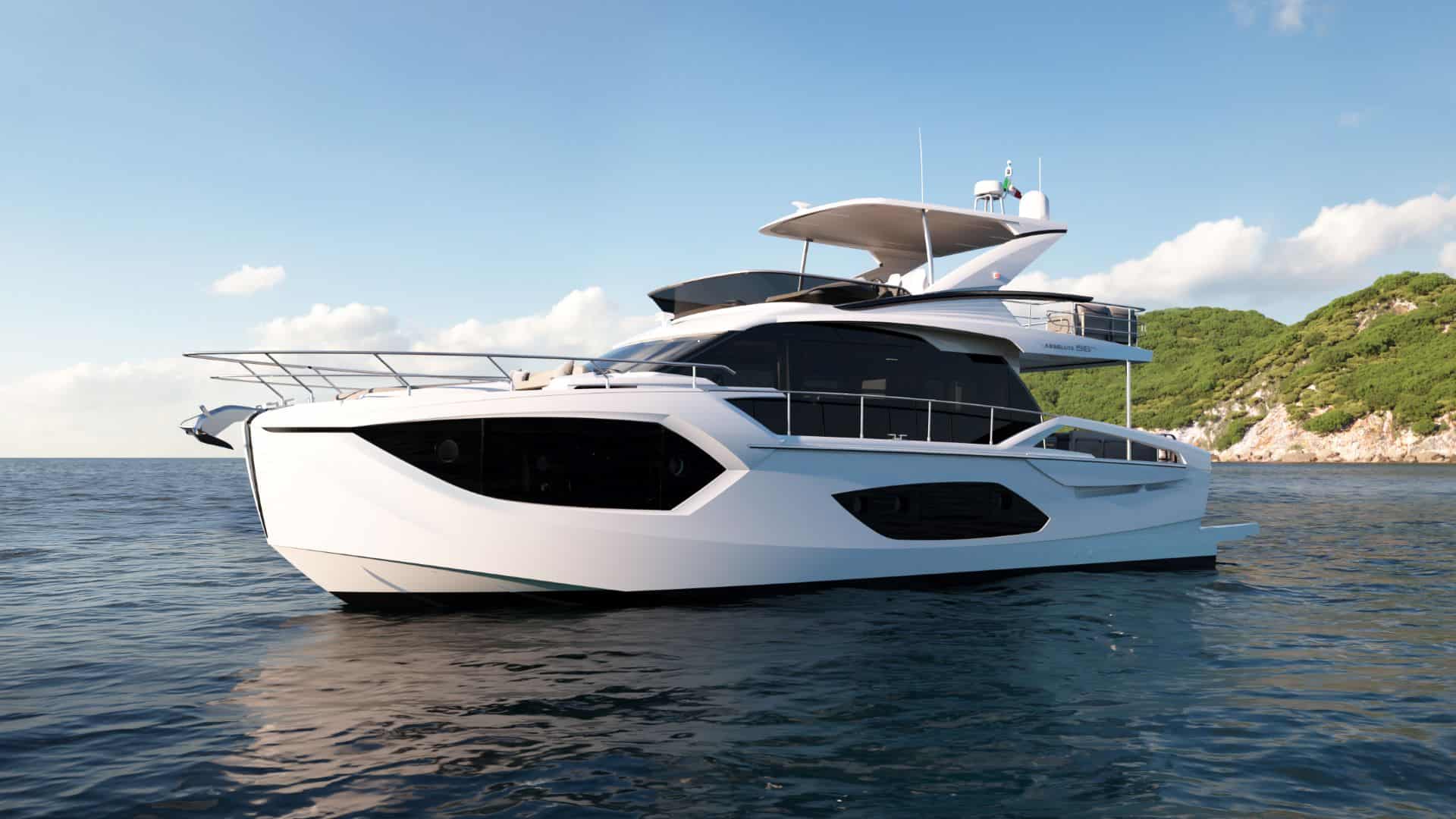 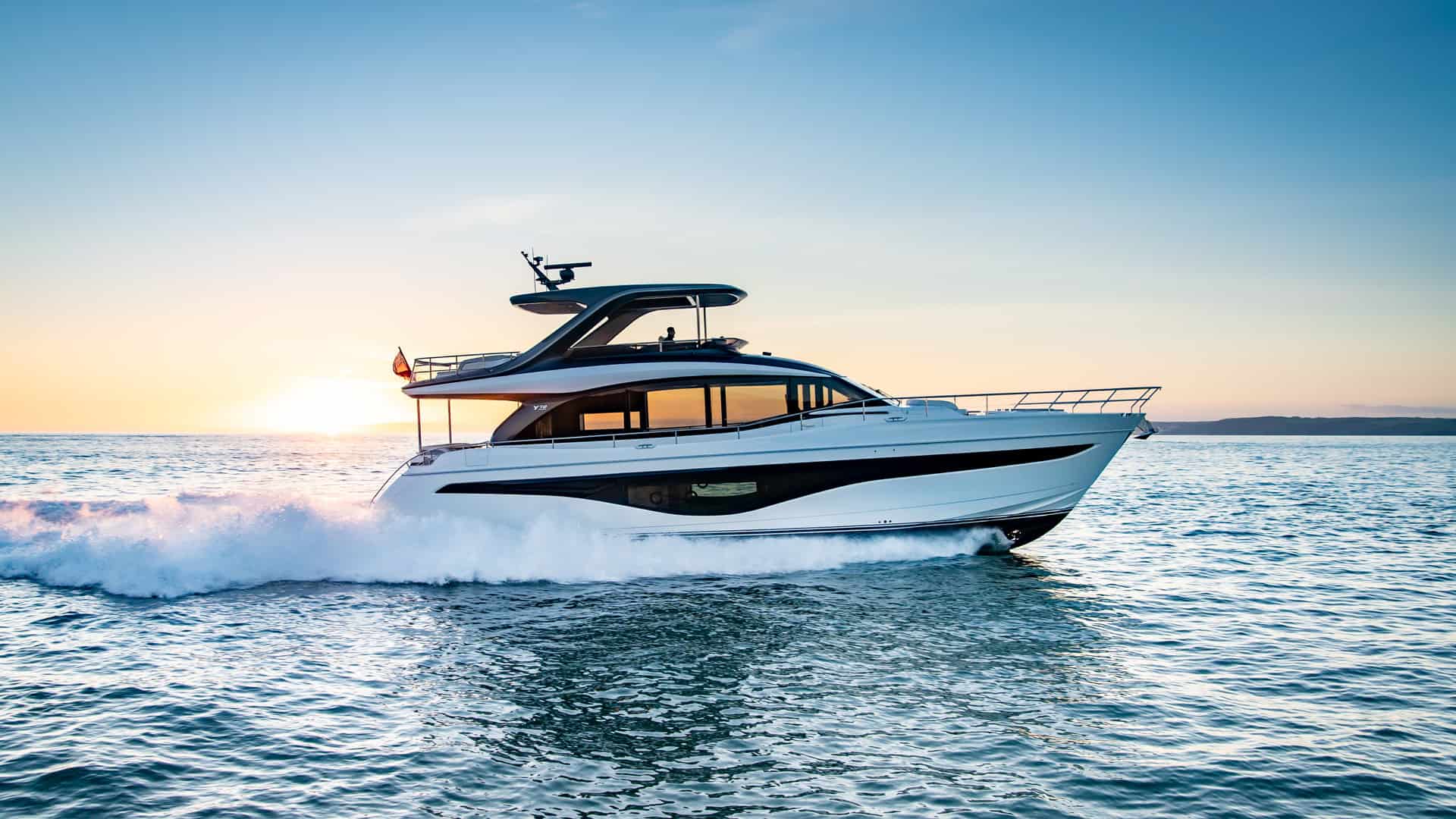 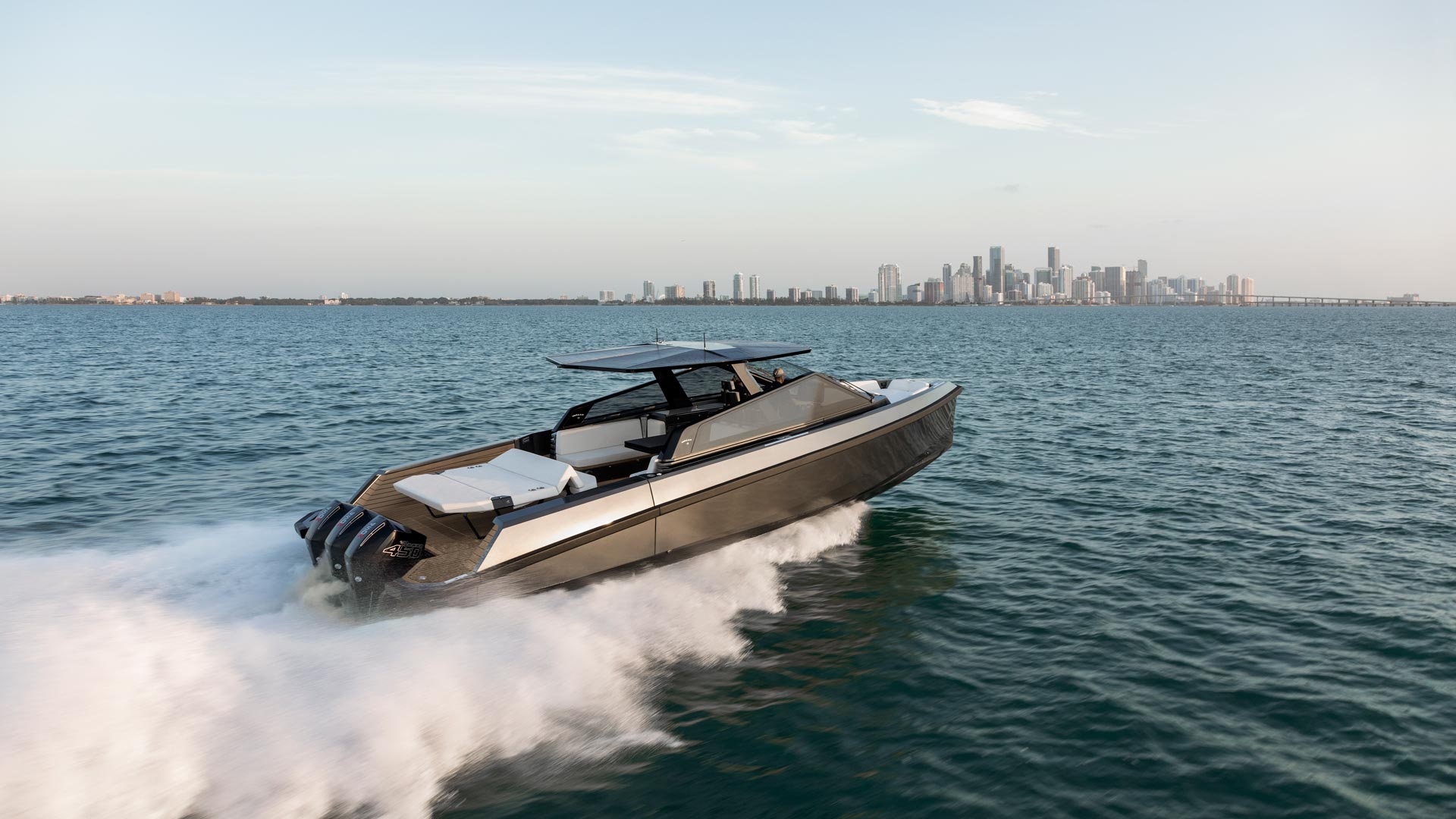