Pershing 8X debuted in Duesseldorf last year, taking everyone’s breath away and confirming Fulvio de Simoni as creator of yet another new generation of the most popular open yachts on the market. Just when we thought Pershing had reached limits of their design, the new model proved us wrong.
Unique in many ways, Pershing 8X was well worth the wait – we only got to test it during the 2019 Cannes Yachting Festival. There are probably not too many moments in a life of a yachting reporter as great as setting sail from Cannes early in the morning to test a brand new yacht while the city is still asleep. When the vessel in question is a Pershing, that’s a moment to remember.

What makes the new 8X unique? First of all, synthesis of experience, technology and know-how – Pershing 8X stands on the shoulders of yachting giants behind the brand, so it is little wonder she is amazing. The style is eye-catching and based on more than details, but the very first thing you’ll notice when stepping aboard are probably the black and silver elements – visually echoing the carbon construction – and the warmth of teak. The cockpit and the main deck saloon are all about open space.
The glass door separating them can be lowered to create a magnificent space stretching across 50 m2, with all-around views. In the stern garage under the cockpit there is enough space to store a tender (Williams Superjet 345) and a jet-ski, but you probably won’t even look in this direction, as your eyes will be drawn to the most interesting design element aboard the 8X – the curved staircase on the port side, leading onto the minimalistic sport fly deck.

The staircase is unique in shape and design, cleverly incorporated into the side wings – trademark of the new Pershing style – and seems to float above the cockpit, without cramming the space or blocking the view. As smart as it is beautiful, the staircase is unique of its kind on the market and we expect to see it copied soon. Another detail that adds to the open feeling in the cockpit is the possibility to lower the dining table into the floor, which turns it into another sunbed.

The most eye-catching detail in the saloon are the three black chairs of the wheel house – which remind us of starships – and the rest of the saloon is equally futuristic and minimalist in style. The most used part of the yacht, the main deck saloon, is stylish and comfortable, furnished with a low-laid L-shaped white sofa and a glass dining table, with a simple black and white color scheme.
For furnishing, Pershing once again turned to one of their most trusted partners, Poltrona Frau, so the new model delights with stylish leather details and the dining chairs are a work of art. The main deck looks and feels like a sophisticated glass villa, with the view flowing uninterrupted in all directions, even through the giant wrap-around windshield. Owners can choose from two basic interior styles and add their flair during the decoration phase.
Below deck, there is space for four cabins – full-width owner’s aft, VIP in the bow and two twin-size – all smartly designed and furnished, but a layout with three larger cabins is available, as well. The master cabin is impressive as expected, with another eye-catching detail – a relaxing, inviting day bed right next to a large glass window. Up on the main deck, the bow is essentially a large outdoor saloon, with a U-shaped sofa and a sunbed, both easily protected from the glaring sun by a carbon-supported sunshade.

The new 8X may be the replacement for the previous, smaller, Pershing 82, but they have almost nothing in common. Starting from the hull and the superstructure, Pershing 8X is brand new bow-to-aft. Built in epoxy and carbon fiber, the model is currently the most advanced yacht on the market – the very first Pershing built entirely in carbon and thus six tonnes lighter than the alternative. Advanced and stylish, Pershing 8X is unmistakably a Pershing in her heart, too: powered by two super-powerful 16-cylinder 2435-hp MTU engines, the 8X has TopSide surface propellers. 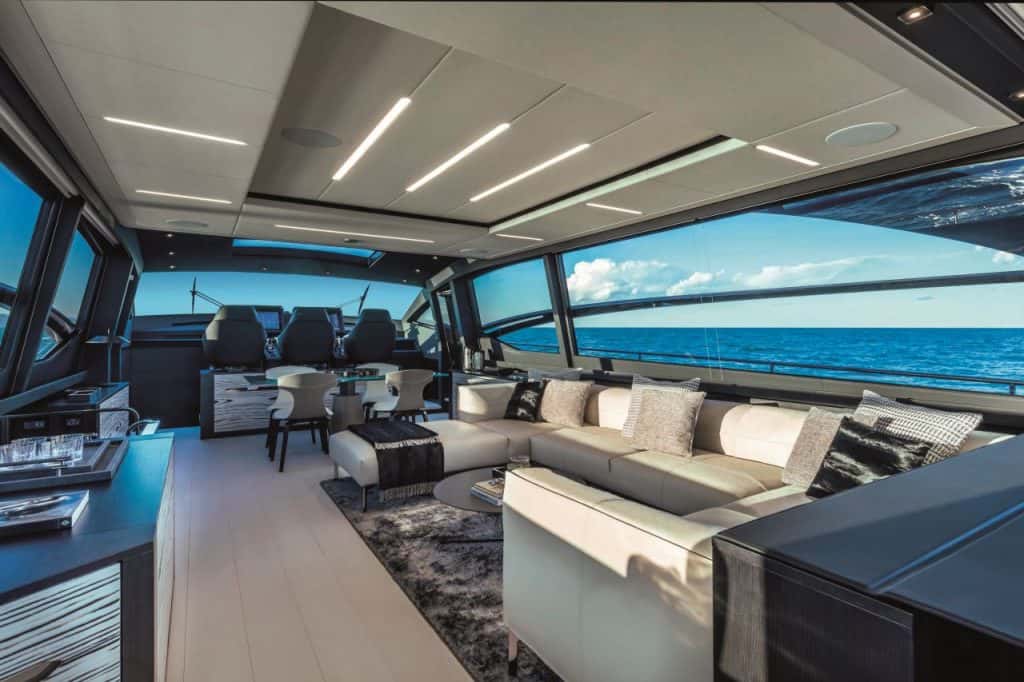 All this power is easily handled via Easy Control, proprietary navigation system designed for use in ‘IPS manner’, using a centrally placed joystick to maneuver the yacht in crowded ports. The system allows virtual anchoring, via the DPS (Dynamic Positioning System), as well as propeller trim control – but simply shines in turns, safely guiding the 8X as if on tracks.
Surface propeller controls are quite difficult to fine-tune manually, but due to the mentioned system not on this Pershing model – this is the first such system on the market, and it’s already perfect. Add to that a steer-by-wire system with automatic and manual modes, and you’ll find out the 8X is a tame lady until you need her to be wild: the manual mode brings as much joy to the skipper as sport mode does to drivers of fast cars.

During our test, we reached 48 knots of speed – and curiously, as much as we were giddy to fly across water so fast, we were more impressed by the agility and the maneuverability of this super-light yacht. Another point for Pershing: all this speed and maneuvers barely tickled our ears, as the yacht is uniquely silent no matter what you do. In every aspect, Pershing 8X is a joy for the eye and the soul, a star of the Generation X yachts.
During our test in the waters around Cannes we have found new respect for everyone at Pershing, with a special admiration for the designers of the superior construction of Pershing 8X.
Finally, a detail that almost goes unnoticed when you barely have enough time for a test, but surely will not during long cruises – in partnership with Videoworks, Pershing have developed Music Hull, a unique system that allows listening to music underwater by using the hull like a high-definition speaker.