Kornati archipelago simply hide some magic, you can experience that magic in numerous ways and we bring you one of the most usual routes known for its beauty

There are many possibilities for cruising Kornati islands, and we have opted to describe one of the most common, beautiful and quick ones, passing through National Park two times. On the voyage, we have stopped in some of the best Kornati restaurants, equally popular for yachtsmen as the National Park itself. Our first stop was Opat Cove on the eastern side of the Kornat island, which is an excellent example of what you can expect in those waters: tiny coves, intimate restaurants serving delicious, simple food, and sea as clear as glass. Berth can (and should) be reserved, as well as a place in a restaurant. One thing to be careful with in the park is fuel – there are no service stations anywhere in the park, so make sure you enter the area with full tanks, the same goes with water. Gastronomy has made impressive progress in the area in the past decades, and simple restaurants of the past offering mostly grilled fish and local lamb meat have grown into little foodie havens interpreting the traditional regional food with more creativity.

Even though fish and shellfish are still the cornerstone of every menu, the dishes are now modern and interesting – in Opat you can feast on truffle and John Dory carpaccio, tuna tartare and salt-baked fish. Although most visitors come to Opat Cove for dinner and sunset, we preferred the morning calm. If you wake up early enough, hike up the hill east of the restaurant and enjoy the clear view of the rising sun bathing the neighboring islands. After our breakfast and coffee, we sailed on toward the isles of Lavsa and Piškera without taking too many breaks, enjoying the sea and the surroundings, dipping in for a swim from time to time. Our next destination was Vruje cove, again on the largest island in the archipelago. The cove is picturesque, with several old stone houses still standing. The only restaurant in the cove is the aptly named Robinson, whose long list of delicious appetizers will make it difficult for you to stay hungry enough for the main course. We spent that night in the neighboring Telašćica Nature Park, in the bay of the same name – the largest natural bay in Dalmatia. The park is located on Dugi Island, at the western end of the Kornati National Park. Telašćica is well worth your time, especially if you are already in the area: extremely popular, famous for cliffs rising 200 meters above the water and plunging 90 meters below, as well as a healing salt-water lake, Telašćica is best visited early in the morning or late in the afternoon.

Tourist boats buzz around the park all day long, so throughout the day the place is too crowded for private boats. But there are many small boats around selling fresh fruit and vegetables, juices, wine and beer – a real floating market. Another good thing about Telašćica are the many buoys guaranteeing a safe night and peaceful sleep. Next, we turned back toward Split, and again passed through the Kornati National Park, making our first stop at the Vela Smokvica islet in the eastern part of the park. It would have been nice to see the northern part of the Kornat Island and Žut as well, but that would have lengthened our journey. On the islet, we dropped our anchor in the bay of the same name, where we found several private homes and two restaurants; Piccolo and Smokvica. They are both served by private berths, so you can enjoy your lunch and never take your eyes off your boat. Among the two, we chose the Smokvica which has recently been renamed (from Mare) and re-branded, with the new owner going all out to make guests feel special (and well fed!). We loved the squid and tuna carpaccio with wasabi and sesame as appetizer, and then chose the fish to be grilled in the bread oven as main course.

After a soul-warming dinner, we spent the night in the bay, and set out in the morning toward Žirje, stopping at the Kurba Vela islet. We got to Žirje just in time for lunch, found a buoy on the eastern side of the island in the bay of Stupica Vela and got off the boat for a carefree lunch in trattoria Stupica. As the exception to the otherwise lovely dining experience in the archipelago, Stupica was a bit of disappointment. The first clue that told us we were tiptoeing toward civilization was the too loud TV blaring music that in no way added to the atmosphere. The drinks were warm and the menu uninspired, but at least the tuna was fresh, so the visit was not a complete waste. Maybe the staff were just having a bad day. It couldn’t spoil our mood as we enjoyed the pristine nature, the quiet, the silence and the delicious local food, but we had time for just one more dip and had to return to Split. Kornati were well worth a visit and we are hoping to come back another time, for a more detailed look at the islands.

Yachts guide to Brač: Island of the cultural adventure

Exceptional and challenging in its specific beauty island of Brač has been cherrishing olive and vine, sheep and goat, stone-masonry and stone-cutting… completing tourist offer …

Sailing in Croatia: Magic labyrinth between Zadar and Kornati

The 62nd, spring issue of our luxury yachting magazine is now in sales. Five boat reviews Our spring edition signals the start of the new …

OFYR Tabl’O is a table grill for pleasant moments of socializing and having fun with delicious snacks. Compact, elegant and efficient, the ideal table grill … 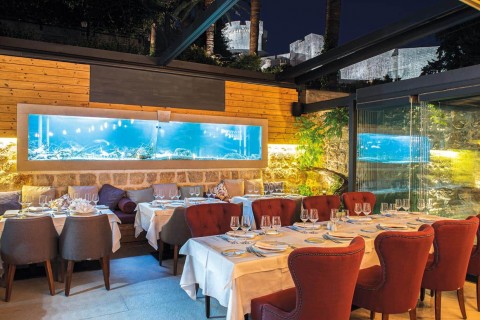 The Croatian chef has been preparing meals for luxury boat owners for several years ‘My name is Luka Grubišić and I am an innovative, creative, …