Blaca Hermitage: Attraction in the heart of Brač

The eremitic monastery of Blaca can be approached from the sea; it is an opportunity to enjoy the spectacular cove, interesting hike, and the fascinating heritage left by the Glagolitic priests for the future generations

The eremitic monastery of Blaca is one of the most beautiful monuments to life on Dalmatian islands and today it functions as an eco-museum, visited frequently by foreign and domestic tourists. The harmony of tradition and urban development left by the Glagolitic priests who established the monastery in the 16th century, leaves no one indifferent.

Sailing in Croatia: Magic labyrinth between Zadar and Kornati

How to get to Blaca monastery?

The priests had with their hard work and sacrifice acquired a large estate – agricultural lands, merchant ships, rich library, printing office, and a valuable astronomy collection by the last hermit, Don Nikola Miličević. Blaca is indeed an extraordinary dedication to human work and perseverance, with unique historic, economic, artistic and scientific contents. Blaca Hermitage can be reached from various directions but always and only on foot.

One of the many interesting stories about the life of hermits is the one about carrying a piano from the shore; as a reward for getting the piano safely to the monastery, local farmers were allowed to drink as much of the priests’ wine as they wanted…

The Blaca museum and monastery can be approached from Blaca bay and from there it is a half-hour hike (or longer if you are not in a hurry). We think this is one of the most magnificent Dalmatian island cruises you can imagine. Blaca itself is a gorgeous natural south facing cove, with pebbly beaches, turquoise waters and a sandy seabed. During the anti-cyclonic winds (bora and mistral) it is a good anchorage to spend the night; and as any other Adriatic cove, it offers relaxation in the sea and sun.

What makes Blaca so special is the possibility to visit the monastery – we recommend that you take this walk in the early morning as the temperatures usually become very high later in the day. The access via a narrow path reveals small sinkholes where once valuable soil was collected and mature olive trees tell us that the area has been cultivated for a long time. One of the many interesting stories about the life of hermits is the one about carrying a piano from the shore; as a reward for getting the piano safely to the monastery, local farmers were allowed to drink as much of the priests’ wine as they wanted, they apparently drank over sixty litres…

Centre of a complete and rounded eco-system

Once you see the path leading from the cove to the monastery that the said piano (still present in the monastery) took, you will get the idea of how the priests and local people lived. Blaca was also the educational centre of its part of the island. It had a small school with an unusual tuition fee for its students – one log of firewood a day.

In his text about the monastery Dr.Sc. Radoslav Bužančić says: ‘It has become a blend of Mid European urban comfort and traditional lifestyle of rural areas of Poljica and Brač. The same frame contained library and piano salons, studies and musical instruments, but also open fireplaces with smoke for meat drying, bread ovens, and storage rooms. Blaca is not only a priceless cultural monument, it is an absolute point in space, the centre of a complete and rounded eco-system, parts of which are the cultivated monastery fields and farms, and shepherds’ hamlets with pastures scattered across the foot of Vidova Gora.

This was a place of daily exploration of new methods of farming, implementation of new technologies like fruit drying or production of wine based on contemporary technical achievements; large quantities of olive oil and honey were produced. A test exploitation of pine resin was introduced for the production of turpentine, and pyrethrum plantations were experimenting with the production of natural pesticides.’ Extensive conservation & restoration work has been done on the museum complex in the past four decades, while since 2007 integrated protection activities are done within a widely defined Eco-museum program.

The next phase will, besides continued preservation of the museum, include improvements of the museum program following the eco-museum concept, and coming up with solutions for use of renewable energy resources and revitalization of economy. Jasna Damjanović, the Principal of Brač Culture Centre emphasizes the importance of obtaining necessary financing from appropriate EU funds to complete this brilliant project.

The museum today operates with minimum staff and limited capacities and the overall revitalization of this area in the period from 2015 to 2020 would mean exciting new features in the cultural and tourist offer of this listed heritage site. The offer of local cuisine would flourish with the reconstruction of commercial buildings, and Blaca would, just like once upon a time, make its own wine, oil and honey. Don Niko Miličević’s observatory would work again, and with the help of modern technology, it could become a new tourist and scientific attraction in this already captivating Hermitage.

New CRN Voice Is An Icon of Creativity

Dufour 470 Symbolises the Renewal of the Brand

Monaco Yacht Show Will Be Designed Around Superyacht Clients

Swan Shadow: The Debut of Nautor’s Swan in the Motoryacht Market 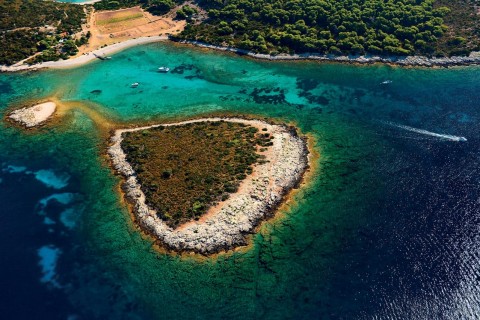 Parts of the Vis archipelago, especially those around Jabuka and Brusnik islets, as well as the interior of the Island of Vis, were formed by …

Unique monumental and natural sites of each state are invaluable for the entire mankind. People do their best to protect them, preserve for the next …

Living monuments to traditional architecture and lifestyle of the age gone by, these villages can still offer worthwhile advice for living in our modern times …

When visiting Dubrovnik or Split, you may be expecting the usual holiday museum visits and sightseeing, however, you should remember that Croatian islands are captivating …

New CRN Voice Is An Icon of Creativity

CRN Voice M/Y 137, the latest fully custom steel and aluminium work of art by CRN, has been delivered to her owner. Taut yet fluid, …

Dufour 470 Symbolises the Renewal of the Brand

Monaco Yacht Show Will Be Designed Around Superyacht Clients

The Informa Group, owner of the Monaco Yacht Show, took advantage of the postponement of the 2020 Show to work closely with the yachting industry …

Numarine, the European high-performance motor-yacht shipyard continues to expand its fleet of explorer yachts with its latest addition to the XP series: the 37XP. ‘We’re …

To celebrate its role as Official Timekeeper, Omega has launched a race-ready Seamaster Diver 300M America’s Cup Chronograph that delivers extraordinary precision under pressure With …

If it’s true that the only source of knowledge is experience, then there’s little wonder that Vripack continuously knows how to create some of the …

Imagine that your hotel room includes a view of co…

Powered by natural energy sources and built with p…

Discover Žut, the second largest island in the Kor…

Top gastronomy is dominated by men whose culinary…

We love to sail around Mljet :) The island is uniq…

Pakleni Islands is simply the most popular nautica…

Spectacular solo race around the world ended with…